As I wandered around a large warehouse that had recently been converted into a sleek design studio, the products on display ranged from customised Converse to quirky clothing printed in a variety of bold shapes and colours.

It’s hard to imagine that just three years ago, the gentleman that I’d ventured out to chat with was working from the garage of his Burnley home while launching his very first business – Graffia Customs.

Paul began his career by studying art and design at Burnley College, before securing an apprenticeship in graphic design.

Paul said: “After my apprenticeship, I stayed at an Accrington-based company for about 12 years. Eventually, I got the itch to work for myself. That’s when I started Graffia.”

And it’s fair to say that it’s a move that’s paying off for Paul. Since 2015, he has worked with some of the biggest brands in the world, including Umbro, Adidas and Reebok.

He said: “Last year, I worked with Nike on event called ‘Strike Night’. It was hosted in an underground, unused theatre in London and they flew in eight of the best strikers from around the world, including Marcus Rashford, Mauro Icardi and Pierre-Emerrick Aubameyang.

“It was a football shooting competition and the winner won a pair of customised boots that I’d made. That was pretty surreal!”

However, despite Paul rubbing shoulders with the elite of the football world, Graffia is very much a family business.

Between Paul and his partner Jayne, they really do take a ‘hands on’ approach, grafting at all hours of the day to work around their children and making sure that all the products are up to scratch.

Keen to take inspiration from the younger generation, Graffia also employs an apprentice called Jack. Paul encourages to Jack share his own ideas and create his own designs in a bid to expand his own knowledge and help to shape Graffia.

“I love seeing young people doing something different. I’m not really one for this ‘being born with a talent’ thing. I don’t believe in that.

“I believe that if you’re passionate about something, you’ve got to practice hard and work at it every day.”

The team use state of the art equipment and even the company where Paul purchased his machinery from phones him for advice on best practice from time to time!

If that doesn’t cement his reputation within the industry, then I really don’t know what does.

“I always stand by any product that comes out of Graffia, whether that’s a £10 baby grow of a pair of bespoke football boots that cost £1,500. I put the same amount of energy in to everything I do.”says Paul.

Possibly one of the most extravagant items that Graffia has produced to date is a pair of gold-plated football boots.

Certainty not your everyday kind of request, eh?

Paul politely dodged my question when I asked: “How much would that cost?!” but, always being up for a challenge, it was a commission that that Paul was more than happy to entertain.

I asked Paul if he’d ever move away from Lancashire and he laughed whilst vigorously shaking his head. You see, Paul is a firm advocate of the place in which he worked, studied and lived.

He told me that, from the outside looking in, Burnley can be perceived as a sleepy old mill town. However, that’s simply not the reality these days.

“There’s loads of cool stuff happening here. There’s a really good energy about Burnley at the minute. Come over and give it a go for yourself, make your own mind up.”

You can find out more about Paul and Graffia here.

PREVIOUSLY:
Find out about the man behind the Sean Dyche mural 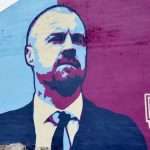 NEXT:
From ‘Banksy’ to boots, art and design redefined