Here at Burnley Social, we’re all about showcasing world class locations and one-of-a-kind individuals. As the primary training ground to countless elite athletes, Fitness Evolution fits both our criteria with ease!

This is not your average college gym. The Burnley College fitness centre is home to not one, not two, but 31 internationally competing athletes (You really thought I was going to say three?).

It’s the only college gym in the UK accredited by TASS (Talented Athlete Scholarship Scheme) which means the best of the best get sent there and undoubtedly, one of the best is Zak Smith Shelley. 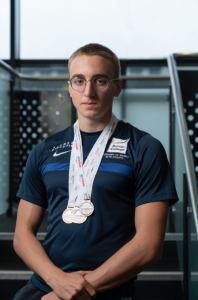 The 17 year old swimmer recently achieved an Olympic qualifying time in both the 100m and 200m freestyle heats at Belfast International Swimming Pool; he puts most of his success down to Fitness Evolution and it’s elite athlete training program.

“The facilities and staff here make this place stand head and shoulders above other gyms in the country. I wouldn’t be able to get this kind of training anywhere else, especially not from any colleges. These kind of gyms are only at uni level.”

“I came across Fitness Evolution on one of the college opening days. If you’re aiming for competitions like the Olympics and the Commonwealth Games, like I am, it takes a lot more than just swimming up and down the pool each day. You need specialist training, and that’s what drew me in.”

After starting here two years ago, Zak’s progress has been remarkable:

“Two of my goals were to go under two minutes on the 200 metre freestyle and under 55 seconds on the 100 metre freestyle. After only eight months, I’m well under those times – they were meant to be goals for the end of 12 months!”

After reaching the qualifying times back in February, he now claims bragging rights as the 13th best 100m freestyle swimmer in the UK. 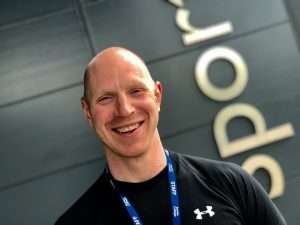 Nathan is the lead Strength and Conditioning coach and has worked with professional rugby players, tennis players, triathletes, runners the list goes on. If you’re into your sport, you might recognise names like the Ameobi Brothers, three very famous footballers from Newcastle, or Ami Dixon, a marathon runner who competed at the 2016 Olympic games. But what brings Nathan – a coach who’s spent much of his life living in Newcastle – to our corner of Lancashire?

“I was drawn to Fitness Evolution mainly because of the opportunity of running this fantastic elite athlete program. Training athletes like Alyssa and other sports-superstars of tomorrow is an absolute pleasure and running this program is something I take pride in.” 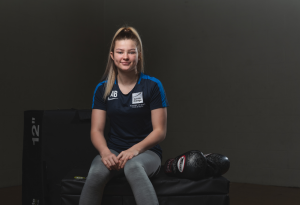 Alyssa Bristow is yet another superhuman star of Burnley College’s sporting world.

Aged 17, and a member of Dragons Kickboxing Club in Burnley, Alyssa has now been training in the sport since the age of 10. Like Zak, she was drawn to Burnley College because of this one-of-a-kind program, knowing there’s nothing else comparable for advancing her performance. But it’s not all sweat and tears, Alyssa assures us that the social aspect took her by surprise:

“Despite all the different sports these 32 athletes do, we quite often train in groups. We’re always having a laugh, taking the mick out of each other – it gives the training that fun aspect which keeps you motivated.”

“The amount of medals is getting out of hand. They’ve had to put up extra hooks at the club because I’m having to stack them on top of each other!”

I think we can all agree that, as clutter goes, piles of gold medals are by far the most bearable.

Both living and studying in Burnley, Zak and Alyssa are just two remarkable athletes putting this town on the international map of sport. These incredible teens, combined with the world-class lads at Turf, are making us suspect there could genuinely be something in the water…

In all seriousness, huge well done to them both – let’s keep showing the world what we’re made of.